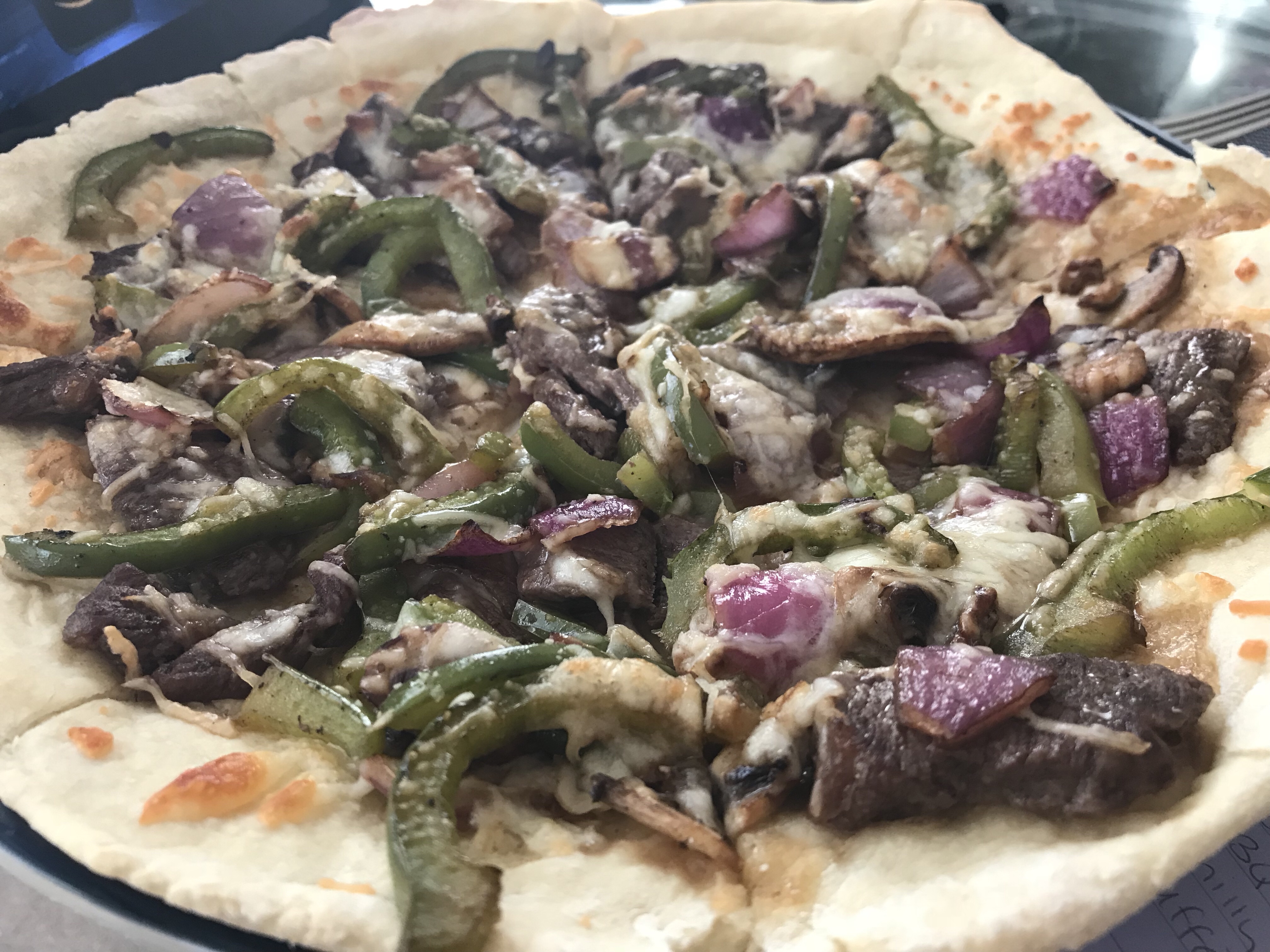 Pizza is a weakness.

I’m not the only one that feels this way. We don’t really order take out because I’m going to want to eat the whole thing. No amount of lifestyle change has made an impact on how I feel about pizza.

I’ve talked about my own struggles with food and there are events in my history that my eating can be linked to – these are times of high stress, times my PTSD is triggered, times of anxiety. For me, like many people I’ve spoken to and worked with, removal of an item can be helpful, but it doesn’t necessarily teach us how to behave around that food.

One way I’ve learned how to behave and treat certain foods is to keep them around in moderation and make some of them on my own. Pizza is one of those foods.

This is easy and completely from scratch, so let’s get started with the dough.

Do you like a classic, standard crust or do you prefer a thinner crust? Choose your crust below.

This nutrition of the whole crust is 620 calories, 20g of fat, 92g of carbohydrates and 16g of protein.

Now for toppings. This is where nutritional value can really change.

Pick your sauce. Pick your toppings and just be mindful.

We went thin crust and sauceless because we made Philly Cheesesteak Pizza and felt that it had enough flavor that we wouldn’t be missing anything by not having sauce.

We each ate half a pizza.

I also made a salad with tomatoes, lettuce, broccoli slaw and balsamic and oil.

When you’re cooking at home and cooking bulk or in an assembled way like a pizza is you make the best estimates for portions.

I know for certain that this WHOLE pizza was 61g of fat, 110g of carbohydrates and 86g of protein. We tried to spread the steak and cheese as evenly as possible and we got it cut pretty much down the middle.

Now before some of you freak out. Let’s discuss. The steak was pretty lean, the veggies were fresh veggies and the cheese was well under a standard portion at a restaurant.

I ate half a pizza, which was about four slices, completely loaded. If I compare this pizza to Domino’s Philly Cheesesteak Pizza here’s what we get:

A medium Domino’s pizza is 8 slices and so is the large.

I want us to be realistic.

I’m sure many of you are saying well that’s not a lot healthier than going out for pizza because I ate half the pie – but be honest with yourself. Will you stop at a slice or two? Will the ingredients you’re getting be fresh or lean or antibiotic free (if you’re into that kind of thing). I’m pro-greasy egg rolls, sometimes, but cooking at home provides you the advantage of choosing your ingredients and building your nutrition skillfully.

I could’ve stopped at two slices, but I also planned for this. I knew I would want more than two slices. Knowing we were having a later lunch with the football game around 1:30 pm and we ate more densely and didn’t eat dinner until about 7 pm, which was chicken breast and broccoli #balance.

Both of the crust recipes can be used for calzones or personal sized pizzas if you want something more individual or have picky eaters. I think you get more volume by making it at home than you do out at a restaurant, but to each their own poison.