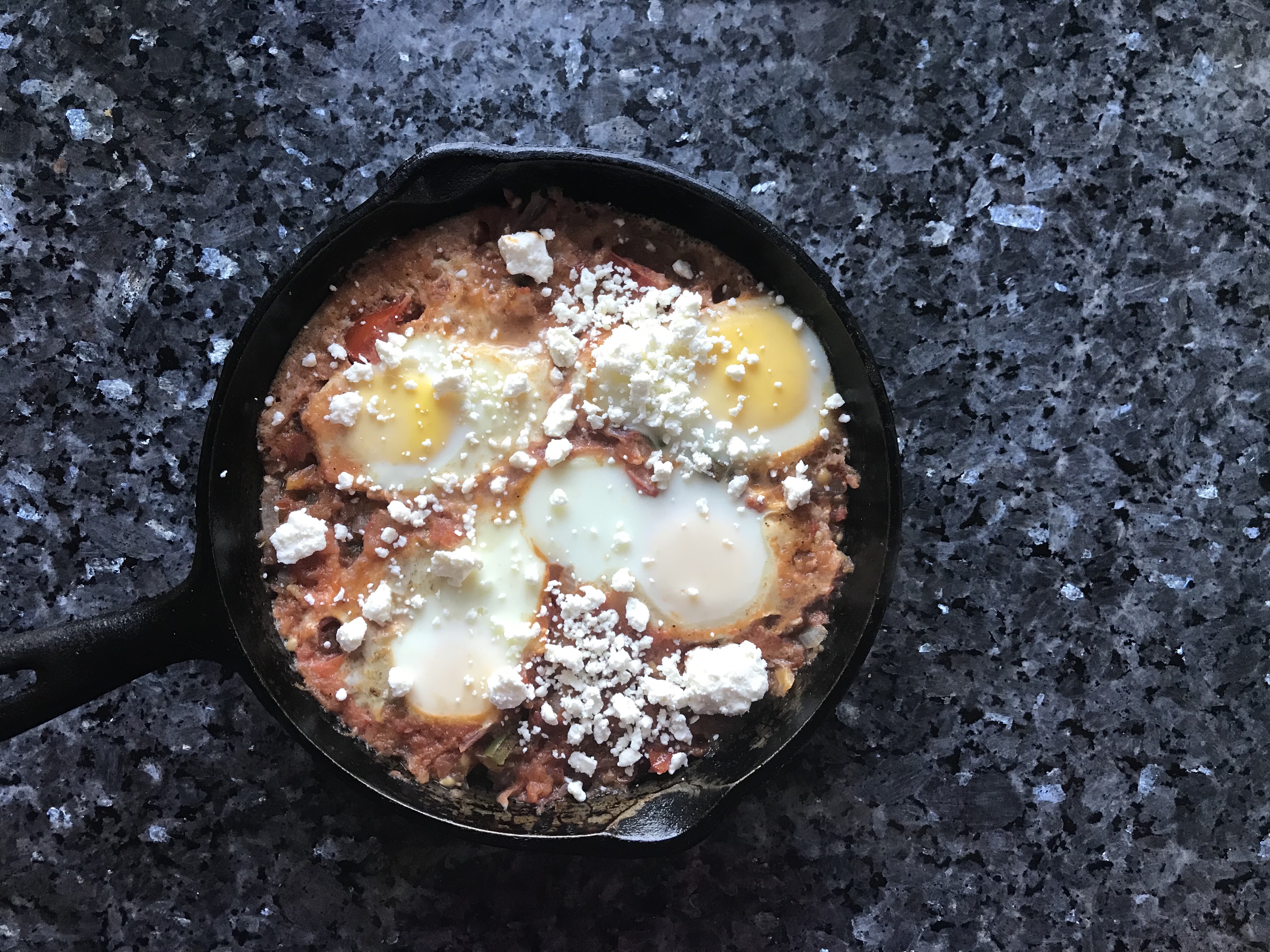 A couple of years ago I had brunch with a friend on Newbury Street. I’m a big proponent of trying new things when dining out because the hope is that the chef knows the perfect preparation and that it’s something I can try to recreate on my own.

I tried Shakshuka, also spelled shakshouka at Stephanie’s and it was the kind of dish that helped me bridge breakfast and lunch – not quiet being able to commit to either. Their version reminded me of pasta sauce, almost like tomato soup with eggs. Since then, I’ve tried a number of versions and have mashed up a few to make my own that has spice and chunks of vegetables.

This is one of the recipes in the Budgeted Eats Series because we eat with our eyes and I really believe that if we give ourselves some time every now and then, we can make meals that take us to a table somewhere else.

2. Peel red onion and rinse with cold water. Wash bell pepper and tomatoes with a little dish soap for remove any dirt and debris.

3. Slice onion into rings and then chop into half inch pieces. Set aside.

4. Like the onion, slice bell pepper and then chop into half inch pieces. Set aside.

5. Half tomatoes and place in food processor. Pulse on low speed so that tomatoes are still chunky, but slightly puréed.

7. Peel one clove of garlic and coarsely chop.

9. Add onions and peppers to pan and stir. Cook until onions are slightly translucent and peppers start to soften.

11. Add in spices to taste. Measurements are the final amounts I used.

12. Crack eggs around the pan as evenly spread out as possible. Bake for 10-15 minutes or until eggs are cooked to desired hardness (less time for soft yolks).

13. During the last few minutes of baking, place a few slices of ciabatta bread to oven rack to toast.

15. Serve with toasted bread like a baguette, brioche or ciabatta.

This is something I first tried at a restaurant when I had brunch in Boston a couple of years ago. It was more sauce than chunky salsa, but after reading about this dish and how it can be changed up I decided I prefer chunky vegetables.

It looks fancy, but from start to finish it takes about 30 minutes to make and it’s inexpensive too.

I invested in good bread. Crust sells their ciabatta bread for $7 a loaf. I was able to get 14, 1” slices from this loaf, which I made into a few recipes – most I will show you here. Side of toast: per serving $1, whole recipe $2.

I used tomatoes on the vine because they were on sale for $1.99 a pound. I ended up buying 4.5 pounds of tomatoes by accident, so recipes after this haul included A LOT of tomatoes. The 4 medium-sized tomatoes were about 1 pound. Tomatoes: per serving roughly $1, whole recipe $2.

My favorite onion is red onion because of the bite it has. JP loves sweet vidalia onions. I’ve used both for this recipe – it just depends on the taste you want. If I want spicy, I go red. Something a bit softer and sweet – vidalia. Red onions are usually $2.99 a pound and vidalia are $1.99 a pound, but because of the taste and the small amount used (as well as how much we cook with onion in general), I don’t mind getting the more expensive of the two because it won’t get wasted. The onion I purchased was about 2/3 a pound and I only used a quarter of it for this recipe. Red onion: per serving roughly $0.25, whole recipe $0.50.

Garlic is a staple in my house. I really love jarred minced garlic because it’s so easy to use and there’s no mess, but I’m working on my knife skills so I opted for a bulb. You can pick up a jar for about $2.99 or the bulb for $0.79. Again, this one I’ll leave up to for preference and knife skills/trust. Garlic: whole recipe less than $0.10.

I had the spices in my spice rack already because these are spices I cook and bake with often. While we know that sauces give our food flavor, I think many forget that blending our own spices can offer a low to no calorie option to keep food interesting. For those with concerns about sodium, most individual spices don’t contain sodium, however, premade blends may – just check the labels.

Olive oil is a staple oil in our house along with butter and coconut oil. I also have traditional vegetable oil for baking that I use for some recipes when I actually follow the directions. Depending on the flavor profile you want, you can change up the oil to an avocado oil or sunflower oil.

For two people, on average this recipe probably cost just under $6 because I can’t necessarily account for items that are staples. I will remind you that there are some things that you will be investing in like good spices or good oil, but those are things that will be around for a while and can be used in many recipes.

This is how I want us to think about our investments in our meals and in our health. Yes, $9 for a few pounds of tomatoes can sound like a lot, but how far can that stretch? The reverse of buying groceries and then making meals – can we pick our menu and buy just what we need so we can save too?