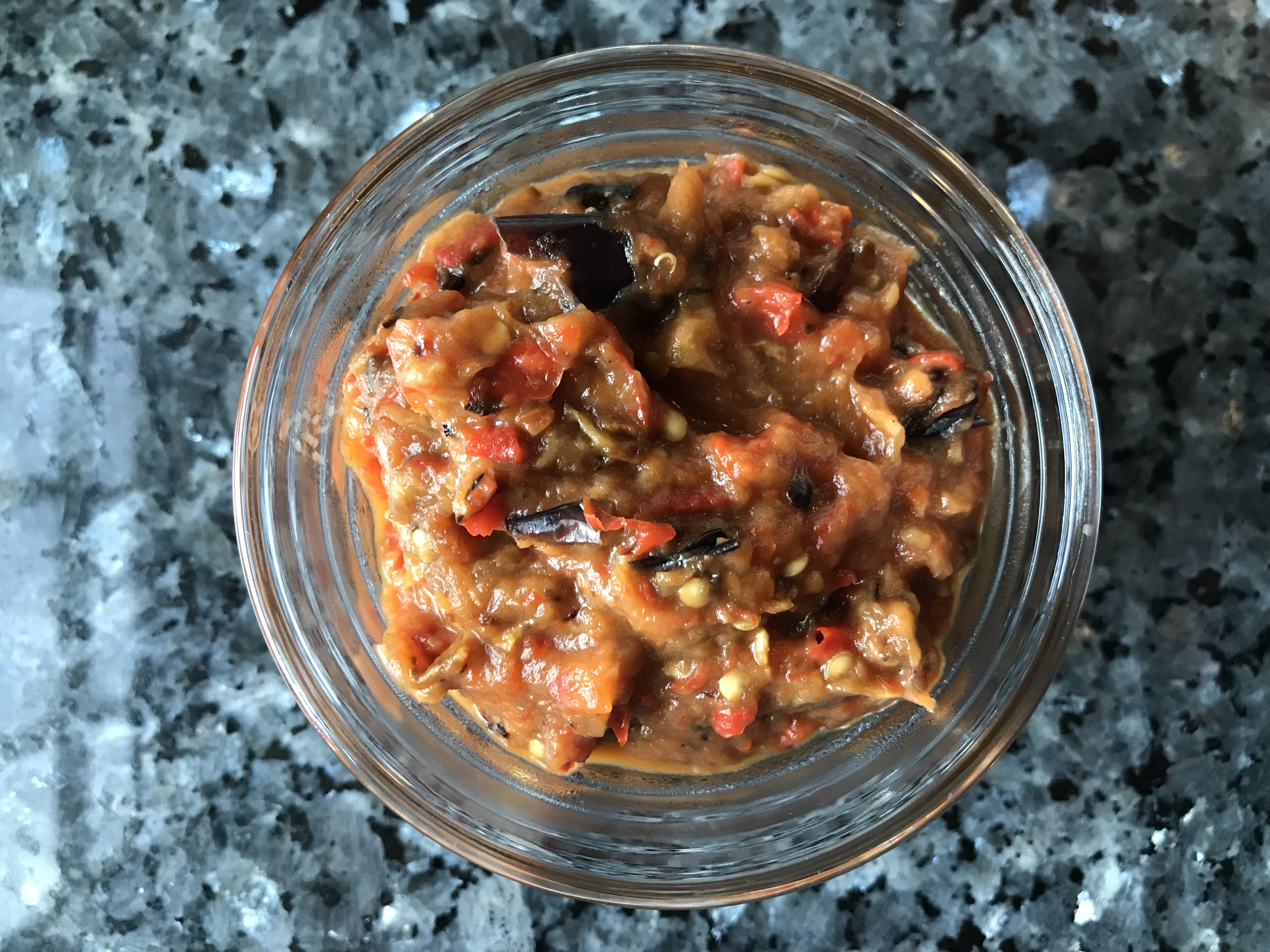 Feeding two of us, I can still find it hard to buy just the right amount of produce. My concerns when buying produce are will we eat it all before it goes bad and what will I make with it so that we’re not eating the same thing.

Eggplant is a tricky vegetable because our go-to recipe is eggplant parmesan, then ratatouille, but after that we rarely know what to do with it other than sauté it with other veggies. It’s something we enjoy, but since they can be so large we try to think of a few ways to eat it otherwise it’s days of eggplant parm. I guess there could be worse meals to repeat, but I like diversity.

I was looking through all the parts we had in the fridge and that’s when it hit me that I might have enough for a spread, but maybe not another meal.

My go to flavors are sweet, but I’ve been working on some savory things, especially for breakfast.

I think we all have those stores that we like to get funky or specialty foods – Trader Joe’s, Wegmans, Whole Foods, etc. Trader Joe’s has both a roasted red pepper spread and a roasted eggplant spread that I love, but can never eat fast enough. For the cost, it’s just not worth it to throw out half a jar. This recipe was inspired by that spread. It’s about 5 servings if you use just over a tablespoon.

1. Preheat oven to 400 degrees and wash all produce.

4. Toss all vegetables in a bowl with 1 tablespoon of olive oil.

5. Evenly spread on a baking tray and bake for 10 to 15 minutes or until soft and lightly browned.

6. While still hot, add all roasted vegetables to a food processor and blend until slightly smooth.

Ways to eat this:

Sweet bell peppers (red, orange and yellow) can be expensive, so they’re something I buy when they’re on sale. The flavor is sweeter and more bold than green peppers, so I don’t recommend going green for this recipe – it’ll change the flavor profile of the recipe. Last week yellow, red and orange were on sale at Wegman’s for $1.99 a pound instead of $3.99 a pound. The pepper I bought was about half a pound, which is a pretty average size, but definitely use the store scale if you have one. Red pepper: per serving roughly $0.10, whole recipe: $0.50.

While the price of eggplant can be intimidating because like peppers it’s priced per pound and eggplants can be rather large, again, use the produce scale at the store and don’t go for the largest one there just because it looks attractive. Eggplants were about $1.99 a pound and the eggplant I bought was 2 pounds. I ended up with three recipes from the same eggplant so I’m not mad about the $4 I paid for it. I used half a pound in this recipe. Eggplant: per serving roughly $0.20, whole recipe $1.

Like I mentioned in the Shakshuka recipe, I had the olive oil because it’s a staple in our house for cooking along with some other oils. However, using the average cost of store brand olive oil for a 16.9 fl. oz. bottle, it’s about $0.25 a tablespoon, which was used in the whole recipe.

I also used a small, left over piece of red onion that happened to weigh about an eighth of a pound. I probably would’ve put it in here had it weighed more or less.

The average cost of this recipe will be about $2. It’ll last about a week to 10 days in the fridge before spoiling because aside from salt, there isn’t much in there for preservation. Because of spoilage, I would recommend thinking of how this could be incorporated throughout the week so it’s waste.

It’s a $2 investment, which seems small, but if you think of everything you throw out on a weekly basis when trash day rolls around it’s more than $2. Some questions I would ask are:

A strategy we have for the weekend since our trash day is Monday is to eat lunches in parts – most things don’t go together, but give us what we need. We will also eat things as snacks that may not be snacks normally like roasted vegetables. This past weekend we had left over burgers with guacamole, watermelon and roasted broccoli. Definitely interesting, but we finished the broccoli and guacamole before they went bad. The burgers were left over from a party and watermelon sounded like a good thing to have to fit another fruit in for the day.

For this week, I’ve picked a few things that were on sale – blueberries, strawberries and tomatoes were BOGO at Market 32/Price Chopper – we’ll see what I can make with those and report back.